The fabric of time 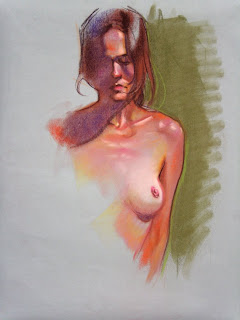 Here is an offering from this past Tuesday's life drawing session. I always enjoy drawing this model because she demands long sweeping lines, and she moves like a ballet dancer even when she's standing still.

I picked up some new paper and thought I'd give it a beating. It's from Fabriano and it has a delicate sharkskin tooth which promised to be hungry for pigment. It took on everything I threw its way, so I decided to challenge it on the last drawing of the night. I quickly established my placements to give myself maximum time to render. Then I decided to find out just how much of a pigment load this paper could take. To my surprise, the paper was still begging for more when I ran out of time.

We're going to start up a Thursday session at the studio as well. The plan is for these sessions to have a longer poses.
This paper is not off the hook just yet.
Posted by brian at 6:15 PM 6 comments: 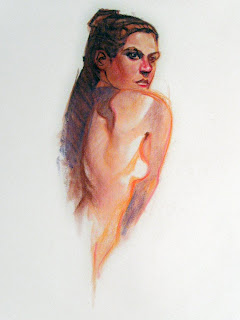 I just made a trip to the art supply store to pick up a few things for the figure drawing session today, and I realized I haven't posted any new figure drawings for a while.

Drawing Denise starts with making a difficult choice. It's not like making a choice with a gun to your head, and coincidently she did have a gun during this session, but it's more a choice of two paths. Do you want to chase the movement, or do you want to chase the light. This piece is what I found along a path of light, and it kept me busy for more time than the pose allowed. 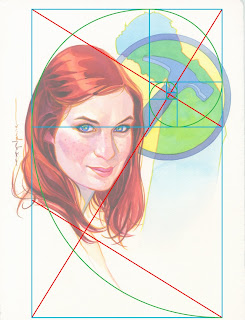 Sam, it's all about getting the proportions right. The graphics dominate the composition on both the pink Penny sketch and the initial pencil sketch, but they are both background elements. I wanted the primary impact to be all about Penny, and then the viewer would experience the background elements in succession. This is also why I didn't go dark on the Captain Hammer symbol. She holds both the darkest darks as well as the lightest lights. This is staging, and surprisingly it's something I learned from working in architecture. You don't want someone to experience a building as a whole but rather the experience should slowly unfold one stage at a time.
I did a Storm illustration years back, and I staged it by concentrating on her eyes. The fact that she has caramel skin and piercing aqua blue eyes made the job easy. This guy fell in love with the piece and immediately bought the original. It was about a day or so later when he mentioned he had just noticed that she was topless. I'm rarely that successful, but that is staging.

That started a serious quest to find any other principles of mathematics which could be applied to art, and that search took me from the Fibonacci series all the way to divine proportions. Quite frankly most of the stuff was fascinating but very confusing and difficult to apply to picture making. I eventually came across the J. Hambridge book Elements of a Dynamic Symmetry and that opened a world of knowledge.

For a while I became obsessive about ensuring my compositions worked within those principles. That obsession faded to a casual pursuit got me accustomed to the divine proportion grid, and now I naturally incorporate it into my work. It's much like color theory, or riding a bike. At first you have to be carefully vigilant and it seems more about thinking than doing, but after awhile all that thinking becomes background music. I still sometimes use it formally to solve problems or to just ignite a tired brain.

I've placed the divine proportions grid over the Penny portrait to more gracefully illustrate this meandering discourse.
Posted by brian at 10:57 PM 8 comments:

Penny for your thoughts 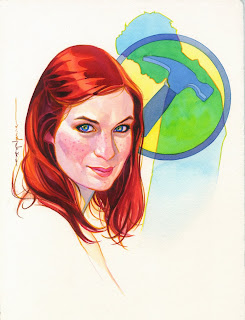 If you go by the Cartman standardized scale of redheads, I'd have to say I mostly lean towards painting DayWalkers. Having that larger range of values and chroma just makes things easier. Paintings a true Gingerkind portrait requires intense scrutiny and subtlety. Here is the conundrum; Red hair has a greater value and chroma range than than both blondes and brunettes, but redheads tend to have less. With flesh tones you can normally get away with literally all the colors, and this includes blues and greens as well if you can keep them fairly neutral. With redheads you have a very shallow analogous pool to play in, from about a warm lavender to a pale orange. This tosses a lot of tricks to create depth out of the window, and you're left with old-school observation and representation. You do still have Pyle's rule of intensity before shadow, and I multiply that by 10 when it comes to redheads or pale flesh tone. I also tried to take it a step further by surrounding any dark area, like the eyebrows, with intense color. This creates a sense of inner glow. Otherwise you approach things as if you're doing a Patrick Nagel print.
Posted by brian at 6:19 AM 7 comments: 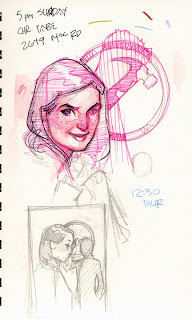 So I get an e-mail with a link to this thing called Dr. Horrible’s sing along blog. This thing is pure viral and pure entertaining. One of the characters is this redheaded love interest named Penny. She is beautiful in a way that's difficult to explain but effortless to observe, and her skin seems to radiate from an internal light source.

When someone suggested that I paint her, this became viral as well.

I didn't get a chance to do a lot of steps on this one, as it went from sketch to a finished piece in only a few hours. I was just getting ready to sign it when I first thought of the camera.

I started with the sketch on the lower half of the page but I felt this was losing the portrait quality. The color in the other sketch is not really something I planned out. I got a phone call while I was developing the sketch and just sort of started doodling around. The basic composition of the sketch seemed to work, but the fact that both characters were more or less facing right it seemed to force the viewer's eye right off the image. I flipped the doctors figure to create more of a visual loop and push the viewer back into the composition. 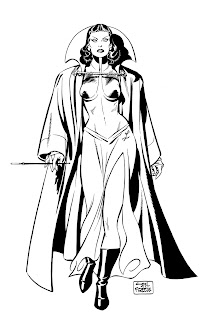 It almost caused me pain to go so bold on some of those lines while in process, but now it seems the right decision. The best thing about the classic inking styles is that you have to rush your way through them. If you are too slow and careful you lose the slash and burn spontaneity which are the hallmarks of the period.

I'll post some of the hand colored prints when I get them finished.

One of the things I admire most about those guys is their strict adherence to story. Every line and brushstroke was meant to embody character, attitude, or drama. For those guys art was the byproduct
Posted by brian at 7:21 AM 7 comments: 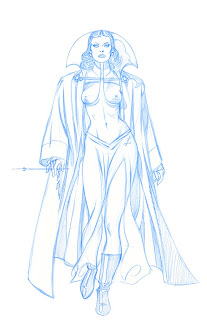 I usually don't put this much pencil on the board beforehand unless I am working in unfamiliar territory, and this is definitely unfamiliar.

Working on both this piece and the DC pulp heroes image really made me realize how rare negative space and spotting blacks are in comics these days. I also have to admit to some culpability myself, but these last pieces have made me want to venture back into the dark.
Posted by brian at 7:15 AM 2 comments: 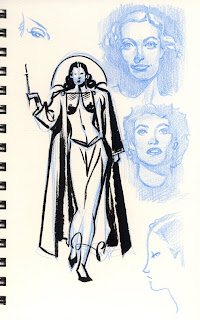 Seeing that I'm in the swing of the classics. This months babe is the Dragon Lady from Milt Caniff’s Terry and the Pirates. Robert and I made the decision to go with her, but I had no idea what to do. She has a great look and I just assumed something would come to me. Then Benno, a good friend of mine, paid a visit to the studio. He had a Milt Caniff hand colored print in his portfolio, and that clinched it. I decided to follow Milt's lead and to keep the image simple and direct.

By the way, rent Mildred Pierce and enjoy the Crawford goodness when you get the chance.
Posted by brian at 7:09 AM 2 comments: 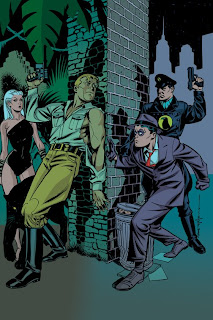 I really enjoy coloring in that slightly soured pulp style. It's a funny thing really. Pulp comics were very seldom in color, but when they were the color was extraordinarily bright. Lead based inks have a richness that even today's color inks can't match. Sure, they're toxic, but isn't a beautiful print worth a few dead bodies? The quality of the inks was actually quite good back then, but the quality of the paper was atrocious. The irony is that the acids used to bleach the pulp to a pristine white also managed to burn the paper to a mustard yellow or reddish brown as it aged. So most of the pulps we see today are actually bright colors but these colors get filtered by the chroma and value of the paper they are printed on. The good thing is that this subdues as well as harmonizes the colors. So, that pulp look is actually an accident of printing.

It's about like when they restored the Sistine Chapel. For decades everyone admired Michelangelo's delicate use of color and value, but after they removed the patina of smoke and pollution it revealed that he sort of color like a cartoonist. Still good, but more of a shout instead of a whisper.

Time does have a way of improving things. 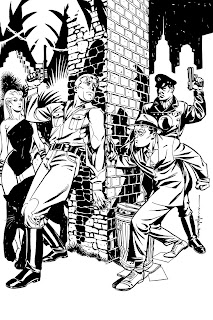 Both Mark and I agreed that the image should be a pastiche of the classics. Mark was thinking along the lines of Darwin Cooke or Bruce Tim, but I wanted to go farther back. I pulled out some Will Eisner along with Wally Wood and Alex Toth for seasoning. I tried to understand the “why” behind their work and see if I could apply it to my own.

This was an all tools on deck exercise. Some of those oily Eisner style lines absolutely required a brush, but I found it was easier to capture that drawing with ink flavor using the Namiki instead. There was a ton of back-and-forth.
Posted by brian at 6:19 AM No comments:

Mark Chi called up last week and asked what I was working on. I got about three words out before he started insulting both me and the work. He said I should immediately put that work away and work on his project instead. He told me it was cooler than anything I could possibly be working on. Then he just said Doc Savage, The Spirit, Black Hawk, and Rima the jungle girl. Dammit… he was right.

He wanted the composition to illustrate DC's current pulp heroes versus their newly acquired ones. Not necessarily fighting, but more of a us versus them thing.

The sketch finished itself in my head before I hung up the phone.