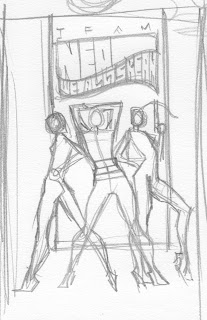 Lets start things off with the spy girls for Clancy.

This is a great commission because it immediately inspires imagery. I can't help but think of those sexy babes from those old TV shows. Emma Peel from the Avengers, 99 from Get Smart, and Julie Newmar were all critically crush inducing for a boy my age at the time. The fashion and design of the 60s all have a graceful yet refined structure. It was still high design, but it was also allowed to play just a little. This is probably what really attracts me to that era.

I played around with doing this as a single figure, but I eventually settled on three before arriving at this thumbnail. For some reason it just works better in my head that way. Another good thing about this commission is that I have very few limitations. I can just allow my imagination to go flying, sailing, or spelunking. This is both a lot of fun and a dangerous proposition.

The thumbnail stage primarily solves the big problems of composition. I can already see changes I'll make before the finished drawing. It's a bit hard to explain, but I'm looking for a certain feeling at this stage. This is not about drawing, but more about attitude. I don't want to go dark and dangerous with this one, but instead I wished to go for a sexy playfulness.